I began my first journal on December 30, 2001.  It is spiral bound, but the spiral is covered by paper that joins the front and back covers of the journal, which has an old map of the world printed on it.  The designers chopped a square out of the front cover, leaving a window to the first page, on which a sailboat is floating under the early morning moon.  I remember loving this journal and having no clue what to write in it.  The first entry: 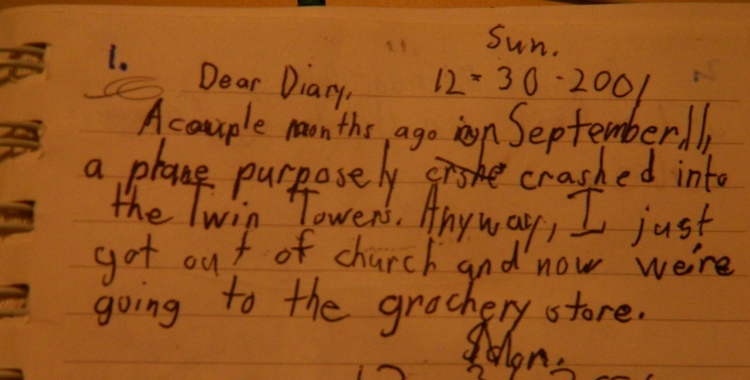 I learned a little about Anne Frank in elementary school.  I didn’t learn much about her, just enough to have a vague sense of horror about the Holocaust instilled in me, along with the thought that it is the journaler’s responsibility to witness tragedy and write it down.  This first entry is followed by:

The list looks more or less neat on your screen because some designer spent months working on the font that I’m using.  But on the page, it is as messy as the first entry.  In addition to my poor penmanship, the ink is smudged because the diary was a victim of The Great Basement Flood of Oh Seven.  The Flood attacked while my family was spring break-ing in a cabin up north.  Cowardice.  It was actually only enough water to saturate the basement’s carpet, but sitting on the carpet were the majority of my childhood marker sketches, school artwork, and this journal.  The useless romantic that I am, I now find it kind of beautiful to think about all of that ink intermingling and bleeding onto the floor—the markers I used to draw dragons, the cartooning pens I drew my short-lived “Little Dude” comic with, the pens I used to list my grievances and gifts in the journal.  My young life, seeping in to itself.

“Started collecting Nut-crackers and leaves and flower peddles.”
“About Snow
In Buffalo: 7 feet
No snowflake is alike”
“Today I’m starting my own library.  My dad took out Holes.”
“I went to school today.  People yelled at me to ‘shut up.'”
“17 days ’till my birthday!”
“We (U.S.) and other countries are bombing Iraq.  I’m still sick.  Now I have an inhaler.”

I journaled sporadically until my sophomore year of high school.  Then it became an almost every day necessity.  I’ve filled almost four of them.  I still write about the world’s big tragedies, my moods, my sicknesses, my vacations, my friends, and my joys.  Looking at them, I think that I have learned a great deal since that first journal.  I store them all on a high shelf.