Walking down the hallway had never felt as victorious as it did on school picture day in second grade.  Per usual, I was rockin the pinkish chipmunk cheeks and hair waxed into what the barber lady called the Macauley Culkin (back when that was a compliment).  My mom had taken me to a thrift store across the street from my first violin teacher in downtown Manchester to search for suitable attire.  I girded myself with the spoils of our hunt for that school picture—a tailored Italian khaki suit.  Mrs. White said I looked like a little business man.  I wasn’t exactly sure what a businessman was, but I figured they at least looked good.

The rest of my elementary school pictures didn’t quite live up to the standard I set in second grade.  I peaked early.  Around third or fourth grade—it depends on the person—many children lose their ability to be cute without any effort.  Maybe this wasn’t your experience, but third grade was the year I first snatched the packet of school portraits from my teacher’s hand, glanced at them once, and slammed them on the desk with the little plastic window facing down.  Besides perhaps one or two kids who always looked good (or felt so strongly that they always looked good that the rest of us believed them) most of the class did the same with their pictures.  Some of the girls would let out a small sob and/or mutter something about retake day—an occurrence that became the first meaningful experience of redemption for many of us.  The guys would either simply flip the pictures over like me or take them out, laugh, and show their friends.  After seeing a few pictures from the latter group, most of us realized that we all looked a little ridiculous and felt better about ourselves.  Trade with a friend, pass it around, laugh a little, stop laughing, grab the picture back, place it back on the desk face down until the bell rang.  And, of course, sign up for retakes.

Picture day was probably my first time feeling self-conscious.  This might’ve been fifth grade or so.  I didn’t play sports, but I did like to read fantasy books—White, Alexander, Cooper, Jacques.  My cheeks were still pretty chipmunk-y and I wore husky sizes.  Husky seemed pretty cool until I learned it didn’t mean the dog.

I started to get taller and a little more daring.  In middle school I started getting clothes at Aeropostale.  If I felt especially daring, I’d speed walk to the sale rack at American Eagle, closely followed by my mother, who in turn was followed by my self-inflicted pubescent embarrassment.  If we were fast enough I could try on a button-down shirt and buy it before anyone realized I didn’t belong there.  I still feel that way in certain stores.  Who cares?

Come seventh grade, I felt like I was back on top of my appearance.  Forget second grade picture day.  I owned a white button-down shirt with pink and purple stripes.  I didn’t wear it often, but I did take it out for seventh grade picture day.  I spiked my hair with gel (some things don’t change) and put on my trusty green track jacket.  I probably wore that thing for half the days in middle school.  I also frequently popped my collar, and did so for that picture day.  The woman with the camera looked at me disgustedly and said, “Put your collar down.  Your mother wouldn’t let you do that.”  I responded, “Actually, we talked about it.  This is what she wants.”  I wasn’t trying to have an attitude; my mom thought it looked good.

The lady swallowed her opinion and took the picture. 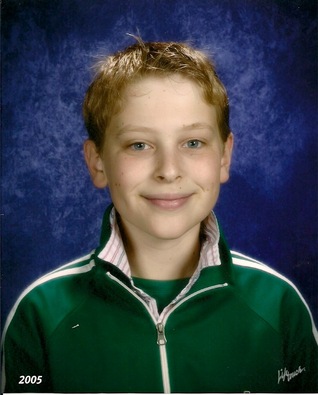 This picture was my second, and last, good school picture.  While I’m not as harsh on my self as I used to be, I’m still self-conscious.  But, now that every person you see has a camera or a camera on their phone, iPod, or gaming device, I think most people are self-conscious.  Good or bad picture, we upload it to Facebook, share it with friends, have second thoughts, then try to wrestle it out of the arms of the infinite internet.