Written for my Dostoevsky class. 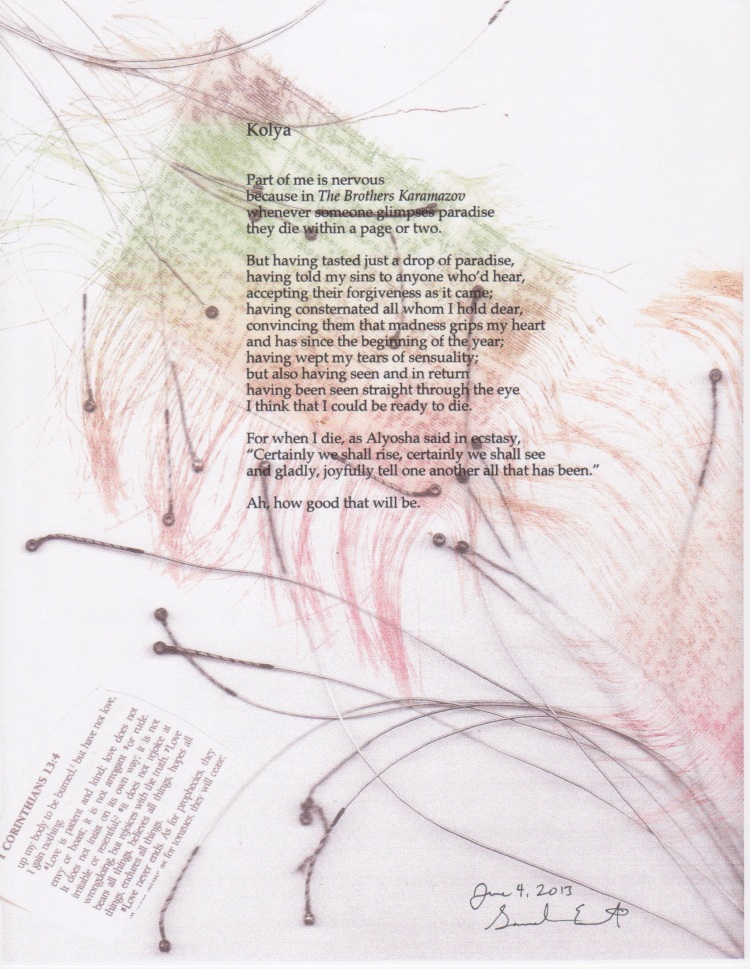 In orchestra recently we have been working on Strauss’ Four Last Songs, for soprano and orchestra. The words sung by the soprano are poems. Herman Hesse, a German-Swiss poet who won the Nobel Prize for literature in 1946, supplied the first three. The final song, “Im Abendrot” is a poem from an earlier German romantic writer named Joseph Freiherr von Eichendorff (1788-1857). While all of the songs have a grandeur to them, “Im Abendrot” in particular draws my imagination out to explore.

I don’t speak or understand German, so my initial impression of the song was based purely on the melody of the soprano line and the orchestral accompaniment. Actually, my initial impression came from our orchestra’s first rehearsal of the song, without the soprano at all. After several weeks of playing it in orchestra, “Im Abendrot” had furrowed into my brain. I finally looked it up on Youtube to find recordings of it by many sopranos, including Renee Fleming, Kiri Te Kanawa, and Jessye Norman. After listening to a couple of recordings I looked up the lyrics.

END_OF_DOCUMENT_TOKEN_TO_BE_REPLACED

In several days I will be flying back to Seattle. Christmas break will have ended, a month away from Seattle Pacific University will have passed, and I’ll have left behind another year. As I prepare for the new year, starting with Winter Quarter, I have been reading The Brothers Karamazov by Dostoevsky, translated by Pevear and Volokhonsky. I began reading it more than a year ago “for fun,” if that expression actually describes the motivation that drove me to buy the book. But school led me away from Dmitri, Ivan, and Alyosha and into the world of ancient Greece. Before I stopped my attempt to blast through it, I made it approximately a third of the way through.

If you are familiar with The Brothers Karamazov, you might recall when the Elder Zosima relates the story of his life to Alyosha and others as he is reaching his life’s end. He begins with the story of his brother, who, an atheist, became sick and returned to God before dying while still a young man. In the last days of his life, he was consumed with a joy and love that confused his mother, visitors, and doctor, who mistook his fervor for madness. It was this passage that I read on the plane back to Seattle nearly a year ago.