Where the airplane gashes morning sun
the summer loses all its fun
I turn and run from everyone;
I turn and there meet you.

When everything is done and said
and I’ve been beaten ’bout the head,
lying in the gurney bed—
that’s where I’ll meet you.

I’m about to commit the cardinal sin of writing poetry, which is to accompany a poem with my own commentary. I’ve wanted to share this poem for a while but haven’t. It came to me as I was settling into Oxford some months ago. When I wrote it, the recent anti-gay violence in Russia (and the scattered incidents in the States) was very much on my mind. I very rarely write love poetry, but when I do, it often ends up being as applicable to God as much as to any possible person. This, I think, is especially true for this poem. I’ll leave it at that.

Thanks to Maddie for her critique even though I was unable to resolve the little bumps.

rejected light forms rivers, pooling
right beneath the engines, cooling
should be warmer, what’s this fooling?
the flight alights in vain

In my careless free fall into annoying amateur iPhone photography, I’ve stumbled across a new app called Plastica. It attempts to replicate the photographs of plastic cameras, something I know nothing about. Here are some pictures from the last couple of days: 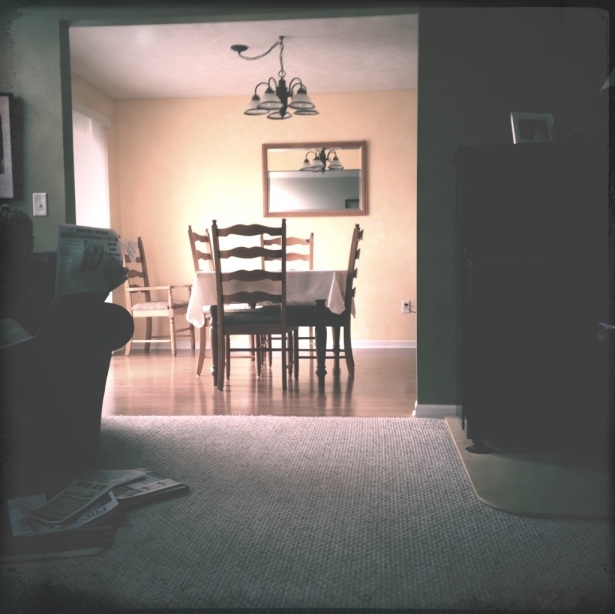 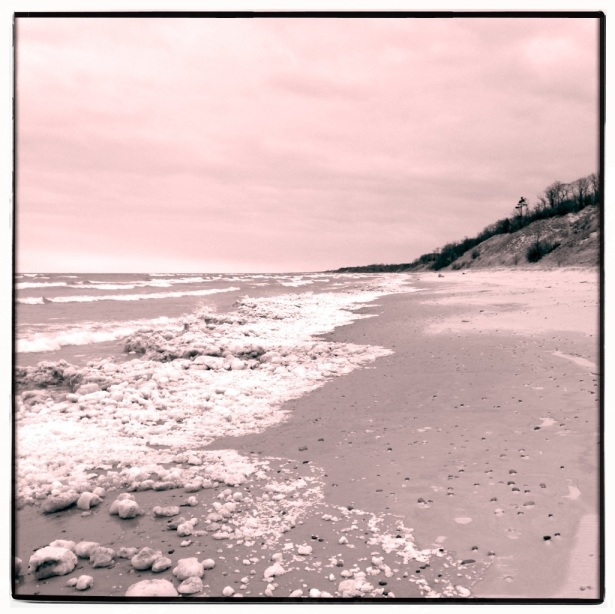 ice on the beach of South Haven

me, on the beach of South Haven

Colorado, as seen from a plane

These are a few thought-remnants from the first leg of my flight to Michigan last week.

You never see car commercials with the car driving luxuriously through the suburbs. Mountain passes are great, as are roads curving through hills, the occasional Gotham-esque city street, and long stretches of straight-and-narrow country roads, but never the suburbs with their cul-de-sacs, kachunk kechunk kachank kachink architecture, and general aura of futility. They could use a sports car or two tearing up their asphalt.

I’ve been in Seattle long enough to feel ignorant and slightly inferior in a nice café but also like I’m really stooping if I go to a Starbucks. A good way to distract myself from these sister emotions is by checking in on Foursquare—and for the check-in picture, instead of taking an aerial picture of my drink’s latte art with a fancy filter, I take an up-close, unfocused “still life” of absolutely anything. This can include the table supporting my beverage, the socket that my laptop’s charger will soon be filling, or the side of the mug. We might as well let the content follow the ridiculous form.

Death walked onto the plane carrying a long tube, the kind architects use to carry blueprints. He was an old white man wearing a white polo tucked into his jeans. His eyes were once blue, but they had long since fogged over. His pupils occasionally peeked out from behind the grey swirls contained by his eyelids.

The first full week of the second quarter of my sophomore year of college is over. And, as it often happens at school, I have gone the week without a post here. Here are a couple of fragments about two strangers I’ve seen in the last week or so.

The first one is something I posted on Facebook while flying back to Seattle a week and a half ago:

There is a bearded old man sitting across the aisle from me in the airplane. So far, he has written a couple stanzas of poetry, the first line of which ended with “solitude,” and ordered the cheese, crackers, and fruit box—he fumbled with the crackers’ wrapper for a solid minute. Now he is on ebay looking through hundreds of antique Persian rugs. When I started writing this status, my intent was to say, “Well isn’t he weird,” but I’ve just realized I might be intruding on the privacy of my future self.

At several times during the flight I felt the strong urge to strike up a conversation with him. I waited for the right moment. Asking a stranger about his solitude poetry seemed inappropriate, but asking to see if he wanted help opening his crackers after watching him struggle for a while might have been a nice gesture. Or, I suppose, it could have made him feel pathetic. After an hour of his persian rug browsing, I considered tapping his shoulder to tell him “I like the pattern on that one” but I didn’t want to make him feel obligated to buy a rug he wasn’t all that interested in. They were at least $150 each, so it would have been an investment.

I didn’t talk to him.

END_OF_DOCUMENT_TOKEN_TO_BE_REPLACED

Who will love a little Sparrow?
Who’s traveled far and cries for rest?

A small house in southern New Hampshire, close to an airport. A record of someone playing the organ is blasting in the modest living room. In the center of the room is my father, holding my hands as he swings giggling toddler me round and round and round in the air like the blades of a helicopter or the hands of an old clock that is speeding furiously just to prove it can still tick or a raucous pas de deux between God and child, creator and created, his hands dwarfing my wrists as I fly over the carpet screaming with delight.

When I shared this memory with my dad he denied it ever happened. It could be a dream that I’m remembering, as many of my early dreams were about flying out of my bedroom and down the stairs like Peter Pan—because if you could fly, isn’t that the first place you would want to go, downstairs?
END_OF_DOCUMENT_TOKEN_TO_BE_REPLACED

The college search is hard for many people.  Some lucky duckers know what they want to do and where they want to do it, only apply to that place, get accepted and attend.  Others, like myself, have a vague sense of what they’d like to study and maybe a lead on a school they could be interested in.  I thought that I’d like to study one of the liberal arts and I applied to eleven or twelve schools.  Halfway through application season (January or so), I switched my intended major to music.

Some of my Christian friends have a strong sense of God’s will for their lives.  Whether they use the phrase or not, you can tell they know—or at least think they know—which school God wants them to attend, what career God has prepared for them, etc.  “God has a plan for you, and that is so beautiful and exciting!”  This sort of language, although well-intended and true, confused me during my college search, and still does.  The idea of ‘God’s plan’ wasn’t very comforting either, because I thought that it meant I had a one in twelve chance at choosing the Right School, and a similar chance at choosing the Right Major.  There was a lot at stake and I didn’t want to screw my life up.

All right, close your eyes.  Raise your hand if you think that sounds ridiculous and a little melodramatic.  I see many hands in the air, belonging to agnostics, atheists, and believers alike.  Oops, I raised my hand, too.  Ok, hands down, hands down.

I still don’t understand the concept of God’s will, although I’ve learned that it involves a lot more freedom than I had previously thought.  But I couldn’t see that in my senior year of high school.  The fear that I could permanently remove myself from the Right Trajectory of Life added to my depression and anxiety, and was the cause of a couple panic attacks.  I didn’t speak to anyone about this because I felt alone.  Who would listen? END_OF_DOCUMENT_TOKEN_TO_BE_REPLACED